When a voice has too much air going through the nasal passage when speaking, we call it hypernasality or just nasality. 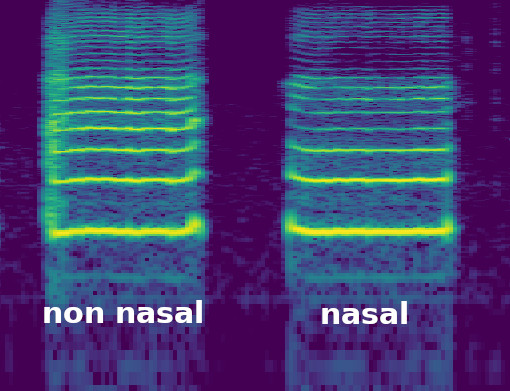 The main method of checking for nasality is to say a non nasal phrase (one without any N or M or NG sounds) with and then without the nose pinched. If there’s a difference, there is nasality. The degree of nasality is how “honky” the sound is when we pinch the nose to block the airflow. We can then reduce the honky-ness intuitively or use other methods.

If you’ve done the above nasality test and it sounds ‘honky’ both times, whether the nose is blocked or not, then there’s a good chance that there’s actually some hyponasality mixed with your body being in the nasal configuration. That means we need to change the configuration to not be nasal, but in the process we will need to remove the hyponasality if possible. If it’s a blockage in the nose, this won’t help, but we’ll notice soon enough if that’s the case, because we won’t be able to hum lightly.

1. Start breathing out of the nose, going into a hum 2. From the hum open the mouth but don’t push air out of the mouth yet - keep it going through the nose. 3. We can then try the nasality test again (hold nose and speak non-nasal phrase) and it should be honky.

4. The next step is to try to reduce that honky sound with the nose pinched by slowly returning to having air go through the mouth instead of the nose. 5. Go slightly breathy to push some air out of the mouth to get things started 6. Then go back to non-breathy but keep it non nasal / not honky